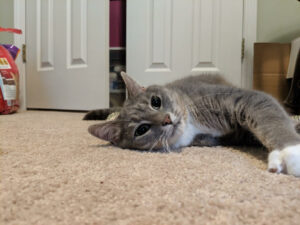 Not too long ago I was reminded of a simple fact: cats don’t care too much for change, especially if they don’t initiate it. I have two cats at this time. Phoebe has always been pretty bold. When we first took her in as a 10-month old, she acted like she owned the place. Our other cats at the time were both male and fourteen years old. She was unafraid of them and did her best to boss them around. Since then, we’ve moved to a new house, her older “brothers” have passed away, and she has a new older “brother” named Sammy.  She’s not afraid of him either. Her naturally-bold nature was why I was concerned when, a while back, she started spending all her time upstairs in the cat room or hiding in the master bedroom. I feared she might be in pain or was sick or that she had been scared by seeing another cat in the yard, but it turned out that the culprit was much less dramatic.

What had her hiding was the ironing board that I had set up when doing a craft project. I knew she didn’t care for the screeching noise that it makes when the legs are extended and locked into place (Heck, I hate that noise myself!), but I didn’t realize that the mere presence of the ironing board long after the screeching had ceased would be enough to keep her out of all rooms from which it could be viewed. I put the ironing board away, and she went back to being her bold and happy self, padding about all over the house like the tiny tiger she seems to feel she is.

That the ironing board could be such a problem for even a naturally-fearless cat drove home the fact for me that cats are creatures of habit.  I noticed that there was something wrong in the first place because Phoebe had deviated from her usual routine. After breakfast she normally naps in her bed in the cat room. The afternoons are spent lounging in the living room on the back of her favorite overstuffed armchair or on the windowsill of one of the windows she likes to look through to survey her domain. In the evening she generally enjoys the view from the top shelf of her cat tree in the living room, although she likes looking out the windows at night as well. She does, of course, take time out from resting to eat and play, but there’s even a routine for the eating, and her internal clock knows exactly when she is supposed to be fed. Routines help cats to feel safe because they know what to expect and what is expected of them when, so a change to a cat’s routine or a change to his environment can cause him stress.

Cats’ dislike of change is an important fact to remember when you’re decorating for the holidays, doing some rearranging, or getting new furniture. Your cat may take a while to adjust. Energy therapy can help with that adjustment by relieving anxiety and facilitating understanding of the situation.  I hope the Lesson of the Ironing Board sheds light on a situation you may be experiencing in your own home.   As always, I’m happy to help unravel the mystery and help your cat feel his best.